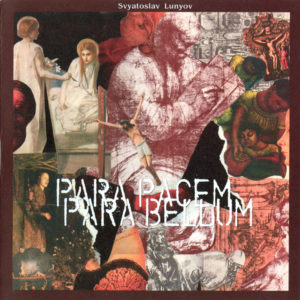 – We knew the world would not be the same. A few people laughed, a few people cried, most people were silent.

I remember the line from the Hindu scripture, the Bhagavad-Gita. Vishnu is trying to persuade the Prince that he should do his duty and to impress him takes on his multi-armed form and says, “Now, I am become Death, the destroyer of worlds” –

This electro-acoustic work combines the traditional elements of the Requiem, Passions, and the Mass.

There where the liturgical canon shows up just as the titles of some parts of the macrocycle. All the parts represent to some extent the variations of the integral and unbroken melodic-harmonic complex. The whole work can be considered as a sort of Chaconne.

The main dramaturgic collision of this work develops on the level of interaction/contraposition between the natural acoustic sounds (the piano, organ, and the strings) and the synthetic electronic timbres.

[1] Fragment from Robert Oppenheimer’s Radio speech [2] The traditional form of the epitaph in Ancient Rome – “Light Earth” [3] Traditional chapter of Requiem [4] When he speaks about God, Ramakrishna often uses the words Brahman and Khali, but he doesn’t oppose them in any circumstances. The abstract Brahman is the same one for him as personified Khali: “Khali is the Primeval Pure Energy; when it is passive, I call it Brahman, but when it creating or running, I call it Shakti or Khali”… “Mankind must die for Deity’s birth. But, on the other hand, the Deity must die in its turn to give place for Superior Manifestation – i.e. existentializing of Absolute. … And there’s All Good Mother’s dancing her celestial dance on the body of Dead Deity”. (Ramakrishna) [5] I.e. for World and Hiroshima [6] The name of the testing area where the nuclear explosion was executed for the first time [7] Another version of this epitaph – “Go with Peace” (or “Rest in Peace”)